FROM WHEAT TO FLOUR FROM FLOUR TO BREAD

FROM BREAD TO EVERYONE.

TRADITION` IS THE YEAST OF THE FUTURE.

NEW FIELDS OF WHEAT TO GROW. NEW CHALLENGES, NEW HARVESTS. WE ARE WHAT WE CAN DO. WE WILL BE WHAT WE WANT TO BECOME.

OUR HISTORY, OUR VALUES

Quality, innovation and a constant focus on sustainability issues are the pillars of Molino Casillo’s operations as a leader in the production, processing and marketing of wheat. In full respect of nature and of the teachings of tradition, we produce flours and semolina of excellence, continuing to evolve with professionalism and passion in a constant search for perfection. Our story began in 1958 when, after learning the secrets of wheat and milling from his father, Vincenzo Casillo started his own business in Corato, in the province of Bari. Thanks to a know-how matured over many years of passionate work, we have succeeded in transforming the ancient art of semolina and flour production into a complex and cutting-edge process. In 1990, when Vincenzo’s four sons Francesco, Beniamino, Pasquale and Cardenia joined the company, we established our international leadership in the flour market, maintaining the same principles of loyalty, transparency and respect that are the foundation of our family and of our work. With an innovative approach based on the valuable work of the Research and Development department, we produce and distribute a wide range of flours and semolinas produced to meet every need and able to ensure an excellent result in every field of use. Many of our flours and semolinas are produced with 100% Italian wheat. For us at Molino Casillo, the high quality standards of the raw material, respect for the environment and the enhancement of the territory are the fundamental ingredients to achieve the satisfaction of our customers, a goal that has always been at the heart of the commitment of Molino Casillo's workers.

VINCENZO CASILLO, THE BEGINNING OF A STORY

Born on 26 December 1938 in San Severo to a family from Campania, Vincenzo Casillo spent his childhood playing in the courtyard of the mill owned by his father and uncles who gave him the passion for wheat that would accompany him throughout his life. Since he showed strong entrepreneurial skills, Vincenzo decided to modernise the plants and expand the market, contributing to an economic growth that would turn the north of Bari into one of the most flourishing craft and industrial areas in southern Italy. He expanded the plant, built silos in reinforced concrete (among the first built in southern Italy), and introduced the mechanical handling of raw materials in bulk, which replaced the previous type of handling in bags. From this moment on, the small original milling plant was transformed into a complex and diversified Industrial Group. There was a further development of the Group in 1990 when the children joined the business and became the protagonists of an acceleration in the company's development that projected the family business onto the international market. After his death on 12 June 2006, his children and his wife Vanda Patruno set up the Vincenzo Casillo Foundation in his honour with the aim of contributing to a development that can become the basis for a healthy and productive social fabric and restore value to the territory in which Vincenzo Casillo worked.

Safeguarding the environment is a fundamental principle to Molino Casillo. Our work starts from nature. This is why we put all our efforts into safeguarding and respecting the people who work on the different territories where we operate. For the power supply needed for all the operative and production activities in our 14 milling plants located on the national territory, we exclusively use 100% green power from Egea , the Italian multi-service company which has been putting sustainability at the centre of its work since 1956.

In the perspective of a circular economy, no part of the grain - even the parts unfit for human consumption - is lost. Every element becomes part of other supply chains including the animal feed sector. In addition, we enhance the value of the territories in which we operate with regional and national supply chain projects. For the packaging of a wide selection of our range we use FSC® certified paper, which is completely recyclable and derived from responsibly managed forest sources. We are convinced that only by implementing environmentally sensitive policies can we pay homage to the earth to ensure that we and future generations can enjoy a world in which nature can still manifest itself in all its precious biodiversity.

QUALITY AND INNOVATION IN THE MANUFACTURING PROCESS

With a distinct attention to the most advanced technical and scientific solutions, we have transformed the ancient art of wheat milling into a composite and complex process: from the harvest to the packaging of the flour and semolina, every phase of the process is subject to continuous controls to guarantee our customers safe products that meet the highest quality standards. Our experience and state-of-the-art facilities are a guarantee for the correct execution of the entire production process: from the accredited analysis laboratory ACCREDIA to innovative milling technologies; from certified production processes to strict controls and traceability of raw materials and products, from wheat storage silos to the logistic distribution platform.

EXCELLENCE AT YOUR SERVICE

In terms of quality, our goal has always been one and the same: the food safety of our flours and semolina. From the selection of the raw material to the packaging, the aim is to ensure the highest quality standards for all our products. These are our certifications: BRC (British Retail Consortium) UNI EN ISO 9001:2015 Kosher Halal UNI EN ISO 22005:2008 Organic productions pursuant to (EU) REGULATIONS 2018/848 Carbon Footprint ISO 14064-1:2012 ISCC plus (international sustainability and carbon certification) GMP + international SA 8000

molino casillo, in your smartphone. 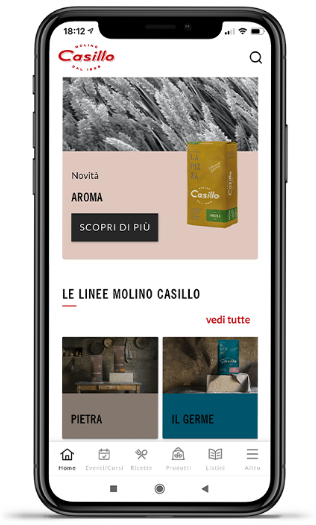 High-quality flours and semolinas at your home.